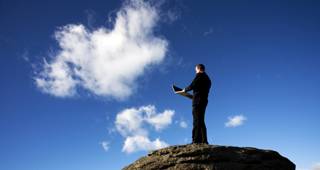 By James Bourne | 19th July 2013 | TechForge Media http://www.cloudcomputing-news.net/
James is editor in chief of TechForge Media, with a passion for how technologies influence business and several Mobile World Congress events under his belt. James has interviewed a variety of leading figures in his career, from former Mafia boss Michael Franzese, to Steve Wozniak, and Jean Michel Jarre. James can be found tweeting at @James_T_Bourne.

It’s important to examine the current ‘state of play’ for cloud delivered solutions based on a couple of key dimensions; what is being deployed in the cloud and who is providing the IT service from the cloud.

The image conjured up by the term “cloud” is that of companies like Amazon, Google and Microsoft delivering large-scale computing infrastructure that eliminate the need for on-premises IT equipment and software. Since these cloud providers build their own infrastructure rather than buying from product manufacturers, it could be argued they are shrinking the market share.

The Opportunity is Larger than the Threat

However, there are other categories of service providers that balance, more than offset the reduced spend and create an opportunity:

For IT organisations , the key to leveraging the opportunity lies in recognising that the requirements posed by each service provider is different and these should be scalable depending on an organisation’s business requirements.

While Nimble believes that cloud delivered IT solutions and applications create an opportunity, we also believe that the requirements posed by cloud providers are different. Specifically, as it relates to storage infrastructure, some of the dimensions that matter more are as follows:

Efficiency. For end customers, making IT efficient is important as a way to manage costs for the Enterprise. For service providers, on the other hand, efficient IT infrastructure is the very essence of their business success. Lowering the cost of infrastructure allows them to price their services more competitively to gain market share and improve profitability.

Flexibility in Scaling. The storage industry has traditionally deployed incremental storage performance and storage capacity in big “capital intensive” chunks at a time. What is needed is an approach that allows service providers to scale performance and capacity in small, low-cost increments – thus making IT equipment costs more variable and aligned with revenues. Perhaps, an even more critical requirement is to avoid fork-lift upgrades of hardware and to be able to perform “rolling hardware upgrades” that are non-disruptive.

Rapid Recoverability. For service providers that operate against stringent SLAs, the notion of nightly backups and backup windows is simply not good enough. What is needed is the ability to provide hundreds of recovery points and rapid recovery from any such point for applications.

Dramatic Simplicity. Lowering the administrative cost of operating a large-scale data centre with hundreds of tenants is key to profitably for service providers. To this end, most service providers rely on extensive in-house automation that requires extensive APIs and deep integration with hypervisor vendors. Similarly, the traditional support model of responding to customer calls with a layered, hierarchical organisation comprised of level1 engineers, level2 engineers and escalation engineers will not suffice. In a connected world, vendors will need to have sophisticated remote monitoring tools that recognise problems concurrently as they occur at customer sites, and remote diagnostic tools that allow for rapid problem diagnosis and problem resolution.

Integrated Security. Gaining the trust of Enterprises through robust security becomes a foundation for persuading them to move their data and applications to a third party. This requires a much deeper investment in integrated security (as opposed to security as a separate layer) on the part of product manufacturers, even if they are not building security products.

Multi-Tenancy. Going back to the theme of driving efficiency, the ability to share infrastructure across multiple users while simultaneously maintaining good quality of service drives superior economics.

Customers have seen improvements in efficiency due to simultaneously lowering the cost of capacity and cost of performance, ability to scale in low-cost increments and scale non-disruptively, ability to deliver superior data recoverability, simplicity and remote support automation.