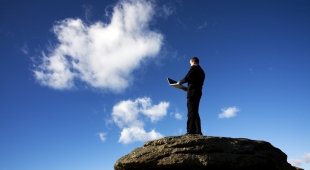 By James Bourne | 13th June 2013 | TechForge Media http://www.cloudcomputing-news.net/
James is editor in chief of TechForge Media, with a passion for how technologies influence business and several Mobile World Congress events under his belt. James has interviewed a variety of leading figures in his career, from former Mafia boss Michael Franzese, to Steve Wozniak, and Jean Michel Jarre. James can be found tweeting at @James_T_Bourne.

Over 95% of respondents in a comScore survey of French SMBs said cloud adoption had a positive impact on security, as well as noticing unexpected benefits, such as up-to-date systems and antivirus protection.

The study of French small to midsize businesses with between 25 and 499 PCs was conducted by comScore and commissioned by Microsoft Trustworthy Computing, although the respondents were made unaware of Microsoft’s involvement.

88% of those polled said they had noticed improved uptime as a result of the cloud, with the same number claiming they were “confident” that their CSP could get back up and running after an outage.

The report also looked at return on investment in the cloud, and came up with positive conclusions. Seven in 10 say that they had been able to “pursue new opportunities” – which could ostensibly mean anything – because of time saved in the cloud, whilst a whopping 87% said that money saved from cloud adoption had been reinvested in the likes of customer service (39%), product development (37%) and marketing (30%).

Unsurprisingly however the study doesn’t show adoption as peaches and cream, with a big barrier to adoption being the worry that talk of cloud security is all hot air. A third (32%) of respondents wanted proof of security benefits before they’d adopt, the report says.

Perhaps those companies should look at the FedRAMP government cloud security accreditation, with HP joining the list of organisations in being FedRAMP approved earlier this week.

“The SMB cloud study provides just the sort of information to challenge prior assumptions and helps cut through the clutter,” Adrienne Hall, general manager for Trustworthy Computing wrote in a blog post.

It’s certainly interesting how the vast majority of companies have seen security benefits, yet a third say they want to see proof before looking to commit.

But what do you think? Does this paper give peace of mind for cloud security? The full report can be found here.