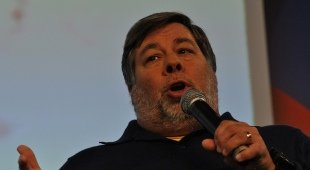 By James Bourne | 2nd October 2013 | TechForge Media http://www.cloudcomputing-news.net/
Categories: Applications, Developers, Industry, Interview, Security,
James is editor in chief of TechForge Media, with a passion for how technologies influence business and several Mobile World Congress events under his belt. James has interviewed a variety of leading figures in his career, from former Mafia boss Michael Franzese, to Steve Wozniak, and Jean Michel Jarre. James can be found tweeting at @James_T_Bourne.

Exclusive Steve Wozniak says he’s “a fan” of the cloud, yet he’s still worried about what could happen if consumers and companies don’t back things up locally.

This may come as something of a surprise to the tech fraternity, for whom the general consensus was that Woz wasn’t too keen on cloud – to put it politely.

Last August, after a showing of the Mike Daisey monologue ‘The Agony and Ecstasy of Steve Jobs’, Wozniak was quoted as telling a packed theatre audience: “I think cloud’s going to be horrendous. I think there are going to be a lot of horrible problems in the next five years.”

Yet 12 months on the Apple co-founder, who is speaking at Apps World Europe in October, said that the position was “unclear” and things needed to be clarified.

“I am actually a fan,” Wozniak told CloudTech. “The advantages of the cloud cannot be turned back.

“The problems of the cloud are going to come out to more and more people when there are failures,” he added.

What are these problems? According to Wozniak, loss of data, data ownership, lack of always-on connectivity and not knowing who’s looking at what are the biggest issues surrounding cloud.

The latter is not a huge surprise, given the damaging NSA PRISM revelations which have swamped the press since June.

In August the Information Technology and Innovation Foundation (ITIF), citing an earlier report from the Cloud Security Alliance, forecast that the US cloud computing industry could lose up to $35bn (£21.9bn) due to reneged market share.

And in an interview with Piers Morgan, Wozniak admitted he felt “a little guilty, but not totally” about helping create the technology which has led to such chaos.

Wozniak’s advice, therefore, is to make sure you’ve got a solid amount of cloud and legacy.

“I like the mixture of the two, and I don’t want to see it go all the way away from your local backup, local songs, local TV shows right on your machine,” he explained.

It’s a message that the Apple co-founder wants to spread – and he feels it has wide ranging significance for the IT and app community.

“If more people are aware of [these dangers], then they’ll put pressure on manufacturers, app writers and app developers [and say] ‘Hey, give us some local protection too’, or tell us,” Wozniak said.

“I worry that those problems are going to come to people’s attention – but it doesn’t mean the cloud is bad,” he added.

Steve Wozniak is the keynote speaker at Apps World Europe on 22-23 October at Earls Court 2, London. Find out how you can attend for free here.