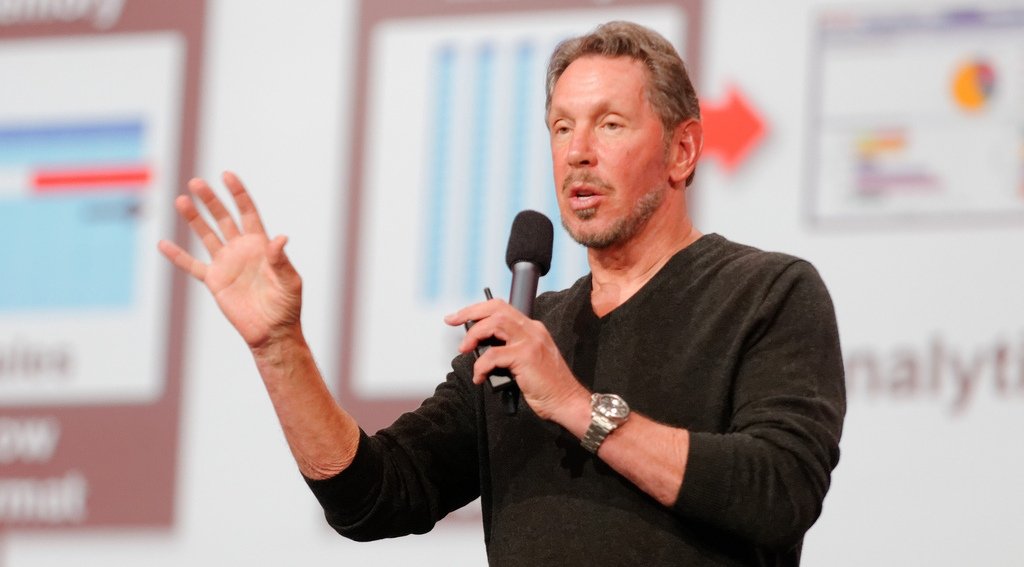 By James Bourne | 19th September 2014 | TechForge Media http://www.cloudcomputing-news.net/
Categories: Big Data, CIO, Economy,
James is editor in chief of TechForge Media, with a passion for how technologies influence business and several Mobile World Congress events under his belt. James has interviewed a variety of leading figures in his career, from former Mafia boss Michael Franzese, to Steve Wozniak, and Jean Michel Jarre. James can be found tweeting at @James_T_Bourne.

Picture credit: “Larry Ellison on Stage”, by “Oracle PR”, used under CC BY / Modified from original

Analysis Oracle founder and CEO Larry Ellison has stepped down from the chief exec role, with co-CEOs Safra Catz and Mark Hurd appointed to steer the ship.

Ellison isn’t leaving Oracle full stop however, assuming the role of CTO and executive chairman at the software giant. In an earnings call, Ellison admitted that not much would change under the bonnet.

It would seem this is a case of ‘meet the new boss, same as the old boss’, then.

The news came alongside Oracle’s first quarter results, which were again on the spotty side. New software license revenues were down 2%, net income stood still at $2.184bn – noting a very slight decrease in constant currency – while total revenues were up only 3%, considerably lower than Wall Street predicted.

In the call, new CEO Catz immediately got the excuses in early. “Those of you who have followed us for a while know that Q1 is a seasonally smaller quarter which can mean more volatility in our results, and that’s what we saw this quarter,” she said.

Not surprisingly, the new chief execs focused significantly on cloud as the way forward. “As the movement to the cloud grows, we expect this transition will affect our revenue to the positive,” said Catz. “These customers will essentially replace their software support payments with a cloud subscription which will mean substantially more revenues to Oracle.”

Yes, this may sound a bit like ‘welcome to cloud’. SAP and IBM, other legacy hardware and software businesses, got there a little earlier with their aggressive transformations. IBM shoots out new iterations at a rate of knots, and remember SAP’s bigging-it-up quote that they were going to become ‘THE cloud company’ (their emphasis, not ours)?

When Ellison grabbed the reins for the earnings call, he discussed Oracle’s new multi-tenant database as a service offering, to be unveiled next week at Oracle Open World. “With the push of a button, your data is automatically compressed 10 to one and encrypted for secure and efficient transfer to the cloud,” he said. “With the push of a button, your existing application automatically becomes a multi-tenant application and it’s moved to the Oracle Cloud.”

To be fair, this does seem like an improvement, especially with the NoSQL brigade of MongoDB, Couchbase et al breathing down Oracle’s collective necks. Yet the analysts, naturally, were more interested in the boardroom shuffle.

On the promotion of Catz and Hurd, Ellison said: “They deserve the recognition. They deserve the CEO title and I’m happy that our management team continues forward as a team.”

When one analyst enquired about whether there would be a change on the sales leadership side, Hurd curtly replied: “No.”

There was a little back and forth between the analysts over whether Ellison was staying on these executive calls. “You’re going to have to wait a little while longer before you get me off the call,” he joked. “I apologise to everyone for that.”

This may reveal more than is let on. Even though Catz and Hurd are the new faces at the top of Oracle, Ellison will still be doing his fair share of backseat driving.

This isn’t to say there aren’t good precedents for this change, however. Catz joins HP’s Meg Whitman, IBM’s Ginny Rometty and Good Technology’s Christy Wyatt in the influential female tech CEO camp, while the concept of two co-CEOs is not new: SAP has been doing it for years.

Ellison, if you recall, was initially dismissive about cloud computing. Oracle has since then been playing one long game of catch up – and if the latest results are anything to go by, then they could be playing this game for a while longer yet.