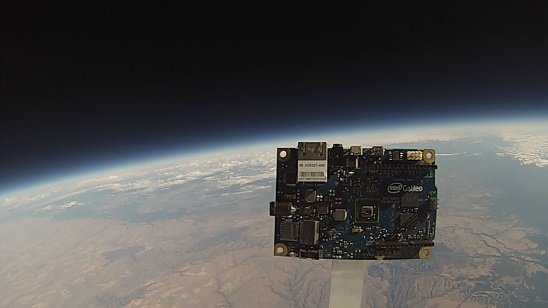 By Richard Potts | 16th January 2015
Categories: Hardware, Open Source,
Using an Intel Galileo microcontroller, a Styrofoam cooler and other do-it-yourself components, technology analyst Jamel Tayeb launched an odyssey to prove the space race is for anyone.

A few days before Elon Musk called off the launch of SpaceX’s AsiaSat 6 to “review all potential failure modes and contingencies again,” another inventor reaching for space sent his makeshift spacecraft 97,000 feet into near space, where it cracked through the Earth’s stratosphere before landing in an Oregon field just 60 miles from the original launch pad.

It’s a clear sign that the space race, once the realm of powerful governments and leading industries, has trickled down to curious individuals empowered with easily accessible, off-the-shelf computer components and gadgets.

Arduino, Intel Galileo and even Raspberry Pi are just a few of the programmable,data-crunching payloads makers are launching into space today to conduct their own near-space science experiments.

Compared with SpaceX’s Falcon 9 and Dragon spacecrafts, Jamel Tayeb’s handmade creation seems more like a helium balloon with an uncovered kite frame dangling from a string. But together they show just how quickly space exploration is evolving beyond NASA-led missions to outer space.

It was just two years ago that Falcon 9 made history when it lifted the Dragon spacecraft into orbit for a rendezvous with the International Space Station. It was the first time a commercial company visited the Space Station.

“Traveling into space is not yet as easy as taking the bus,” said Tayeb, a technology analyst who works in the Intel Software and Services Group.

“But today, we can reasonably get into the skies and take a peek — for real — at that shore of the cosmic ocean, as Carl Sagan said. We can get out there, just ankle deep, and run back to the safety of the beach.”

That’s what Tayeb did on August 20. His weather balloon-powered creation, fitted with computer hardware that he programmed, allowed him to capture atmospheric data then return to Earth.

“The best thing about high-altitude ballooning is that it’s an accessible project for everyone, regardless of experience,” wrote Maker Magazine, which covered the international challenge. “The majority of teams built their payloads using Arduinos and Raspberry Pi’s connected to sensors, smartphones/tablets with data-logging apps, cameras hacked with high-capacity batteries, off-the-shelf GPS trackers, and 3D-printed parts.”

For Tayeb, building a space balloon craft and capturing his own images of the curvature of the Earth was a childhood dream come true.

He also had other admirable motivations.

“I wanted to generate a blueprint that students and academics could reuse,” he said.

He practiced first on an Arduino MEGA 2560 microcontroller then moved to a Galileo board to build his final spacecraft. After two months of software coding, testing the battery- and solar-powered computer hardware, then collaborating with others to assemble the craft, Tayeb was ready to launch in an open, uncrowded area along Oregon’s Columbia River Gorge.

To get there, it took the help of about 10 people, including friends, co-workers and Joseph Maydell, a former flight controller for the International Space Station at NASA’s Johnson Space Center and founder of High Altitude Science.

Tayeb’s craft weighed less than four pounds, just under FAA regulations, which allowed him to avoid registering for permission to launch.

“We used an Eagle Pro Near Space Kit as our platform. In addition of the Eagle Flight Computer, we used two Intel Galileo boards.”

One Galileo was fitted on the outside frame as static, “to immortalize the event,” he said.

The second Galileo computer board accounted for the so-called payload, which was nestled in protective styrofoam and focused on capturing flight parameters such as temperature, pressure and altitude.

For those who want to know, Tayeb shared details about the payload: he used an Intel Galileo (first generation) microcontroller, a 10200 mAh LiPo battery, DC-DC power booster, uMMC logger module and a MS5607 sensor. The Eagle Flight Computer, which is designed to handle temperatures as low as -60C, was fitted to the platform without thermal protection. The Eagle Flight acted as a backup computer, capturing position, heading and speed.

[Editor’s note: This balloon spacecraft will be in the Ultimate MakerSpace at the Intel Developer Forum in San Francisco September 9-11.]

Two GoPro video cameras were fastened to the frame, capturing the voyage in HD.

Combined, the two cameras captured over five hours of video, which amounted to nearly 11 GB of video data.

“Everything gets recorded on-board by each sub-system — computers, cameras, loggers, etc.,” he said. “Then you have to successfully recover the platform so you can extract the data.”

He said there’s no way to view the information in real or pseudo real time while the craft is in flight because even if it was permitted by FCC, the required bandwidth would exceed what’s available to makers today.

Tayeb launched his craft on August 20 after 2 .pm. After about a 3-hour accent through the Jetstream, which the team monitored for weeks leading up to the launch, the craft hovered in near space momentarily before dropping back to Earth, which took about an hour.

“We were getting GPS data every 10 minutes,” he said. But he’d have to wait until the craft landed before he could see the atmospheric data collected by the on-board computers.

The craft landed about 60 miles away from the launch spot, something that made Tayeb proud. But when he finally located his craft in an open field of dry grass, the payload was missing.

“It got ejected somewhere just at landing and we have not yet found it,” he said.

Disappointed but not deterred, Tayeb calls his first mission a great success.

“Science is a real interesting thing,” he said. “With the right help, a team can make pretty amazing things. Building this awoke the daydreamer inside me.”

Tayeb, who is creating a recipe book so others can create a Galileo-powered spacecraft, says anyone can test scientific theories and the laws of physics on their own. Here are his 5 tips: