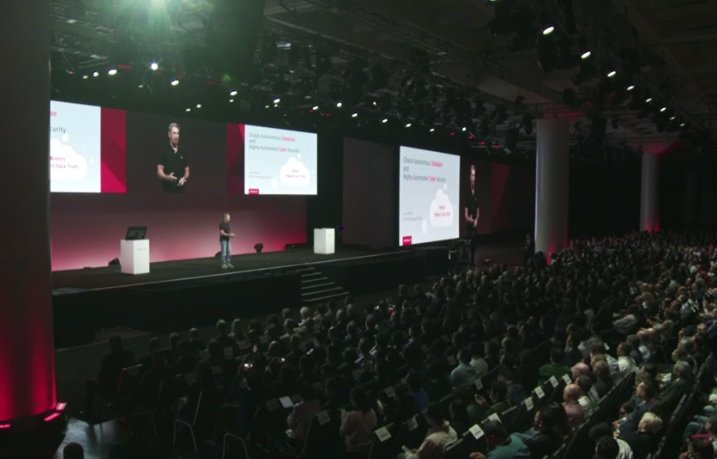 By James Bourne | 3rd October 2017 | TechForge Media http://www.cloudcomputing-news.net/
Categories: AWS, Data & Analytics, Infrastructure,
James is editor in chief of TechForge Media, with a passion for how technologies influence business and several Mobile World Congress events under his belt. James has interviewed a variety of leading figures in his career, from former Mafia boss Michael Franzese, to Steve Wozniak, and Jean Michel Jarre. James can be found tweeting at @James_T_Bourne.

It had been previously set up by Larry Ellison – and it did not disappoint when it finally arrived.

Yes, the keynote at OpenWorld promised a lot of heat aimed at Amazon Web Services (AWS) and duly delivered. But there was also the small matter of what is claimed as the world’s first fully autonomous database cloud, powered by Oracle Database 18c.

Stop us if you’ve heard this one before. Two weeks ago, Oracle’s chairman and CTO took to the stage to outline new pricing and licensing models – more of which later. Yet the autonomous database was the recurring theme, as well as focusing on what Amazon couldn’t do. “Our approach to the cloud business is to lower your costs and lower your risks by fully automating all sorts of platform services completely, with completely autonomous software that runs itself, eliminates the cost of human error, and eliminates the opportunity for human error,” said Ellison at the time.

This time, it was more of the same. “This is the most important thing we have done in a long, long time,” he told attendees. “If you eliminate human labour, you eliminate human error.” Discussing the importance of machine learning, Ellison added: “For years and years artificial intelligence did not live up to its promise, but there is a new type of AI…the first branch of artificial intelligence that really, really works.

“I don’t use the words ‘revolutionary new technology’ every year [at OpenWorld]… but this one is.”

“This is everything – planned, unplanned downtime – you are down for less than 30 minutes a year with the autonomous database,” Ellison added.

This was emphasised by a series of benchmark demonstrations featuring various scenarios, such as Oracle’s database on Oracle’s cloud versus Amazon’s cloud. “I’m just going to run 6a and 6b because the Amazon side of the demo takes too long,” said Ellison. On the first, Oracle took 34 seconds and Amazon 255, and the bill came out at $0.04 compared with $0.23 respectively. With all this came the promise – again re-emphasised from previous gatherings – of a bill which was more than half of Amazon’s.

Amazon’s CTO Werner Vogels, writing in a blog post, highlighted the 10th anniversary since the company’s Dynamo whitepaper was unveiled, which aimed to change the database market to produce a horizonally scalable, distributed database that would scale out for reads and writes. Naturally, the desire for change came about because the company was struggling on an Oracle database.

The company did not comment on the claims in Oracle’s presentation when CloudTech enquired, however Business Insider reported that an AWS representative described it as “no facts, wild claims, and lots of bluster.”

One can read only so much into benchmark tests, but Ellison’s mantra remained. “If you want high availability, if you want lower labour costs, higher performance, all that stuff, you’ve got to be willing to pay four cents, not 23,” he concluded.