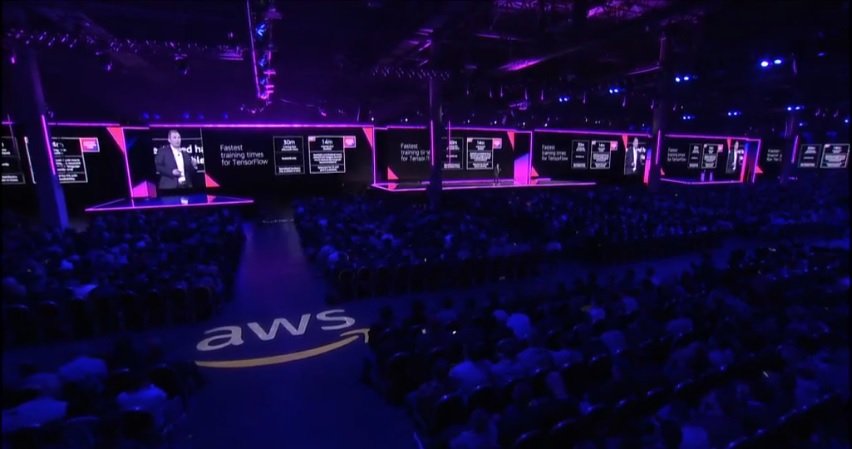 By James Bourne | 28th November 2018 | TechForge Media http://www.cloudcomputing-news.net/
Categories: AWS, Blockchain, Data & Analytics, Hybrid, Infrastructure,
James is editor in chief of TechForge Media, with a passion for how technologies influence business and several Mobile World Congress events under his belt. James has interviewed a variety of leading figures in his career, from former Mafia boss Michael Franzese, to Steve Wozniak, and Jean Michel Jarre. James can be found tweeting at @James_T_Bourne.

Andy Jassy, CEO of Amazon Web Services, noted during his keynote at re:Invent today that on a recent business trip, a senior AWS executive found themselves sat next to an exec from an unnamed competitor. They pulled up a presentation deck which – Jassy paraphrasing – noted its product strategy was to ‘look at what AWS launches, and then move as fast as possible to get something vaguely in that area.’

So with that story in mind, customers and partners, media and analysts, and perhaps a few cloud vendors as well, sat down in Las Vegas to absorb AWS’ updates. Database, blockchain and machine learning all ended up getting a significant airing – but the last announcement, on hybrid cloud, stole the show.

Jassy started out by putting down the various numbers which asserted AWS’ dominance in the cloud market, both in terms of market share and absolute growth. Regular readers of this publication will be more than aware of these numbers; Synergy Research, for instance, said at last count that AWS led across all geographies and was ‘in a league of its own.’ It was here that Jassy threw in his obligatory Oracle dig. “There are some providers who don’t have enough revenue to show up here,” he said, who only appear when they try and grab attention for themselves. You can guess the rest.

Yet with so much to get through, competitor-bashing was relatively brief. The first segment underlined the breadth of the AWS portfolio. Take containers as one example. Customers can use ECS for a container service most tightly integrated with AWS, EKS to use Kubernetes in a managed service, or Fargate for a more ad hoc approach.

With that in mind, a new storage class was unveiled. Glacier Deep Archive is aimed as being the lowest cost storage available in the cloud, at less than one tenth of a cent per gigabyte per month – or $1 per terabyte per month. Naturally, it is aimed at the coldest possible usage; enterprises who are managing data on ancient tape. “You have to be out of your mind to manage your own tape moving forward, and this will be here for you in 2019,” said Jassy. 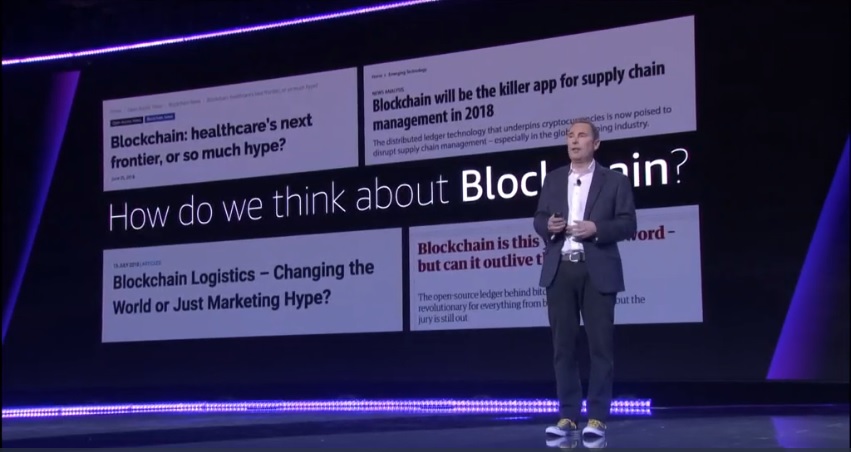 One of the key themes throughout the presentation focused around how developers and technology builders needed the right tools to get the job done. Indeed, practically every announcement AWS made was in response to specific customer pain points. In terms of file systems, Amazon already had Linux workloads covered with its FSx storage product, but added Windows Server and Lustre to it. While the former is an evident attempt to lure Windows users, the latter is of particular interest, focusing on high performance computing (HPC). Both products have the HIPAA, ISO and PCI-DSS security standards out of the box.

The second generation of builders

To some extent, the second stanza contradicted the first. With AWS’ huge depth in its products, complexity can of course be seen as an issue. Indeed, the cloud management space, with vendors such as CloudHealthTech – acquired by VMware, more on whom later – is testament to that. Jassy noted how a second type of builder was emerging; mostly found in enterprise organisations who wanted more of a guiding hand in how to set up products. AWS Control Tower and AWS Security Hub – the former enabling customers to set up a landing zone or environment easily, the latter centrally managing security and compliance across an AWS environment – were launched with that in mind.

One of the more eye-opening statistics was that more than 10,000 data lakes were being built on top of AWS S3. As Jassy noted, the data lake may be the in-vogue concept for 2018. “People realise there is significant value in moving all that disparate data and making it much easier by consolidating it into a data lake to enable you to run analytics and machine learning,” he said. “But if you’ve tried to build a data lake, it’s hard.”

AWS Lake Formation, therefore, was launched in order for organisations to take their data out of silos in days, rather than months, with Amazon offering to do the heavy lifting, from cleaning to partitioning, to indexing and cataloguing. “This is a step level change in how easy it’s going to be for all of you to have data lakes,” said Jassy.

“It’s obvious what The Beatles were singing about,” Jassy joked as the strains of Blackbird came to a close. “Database freedom!” Indeed, they ‘were only waiting for this moment to be free’, and this was where some of the harshest criticism came in – reserved for the legacy, relational database players. “People are sick of it, and now they have choice,” he said. 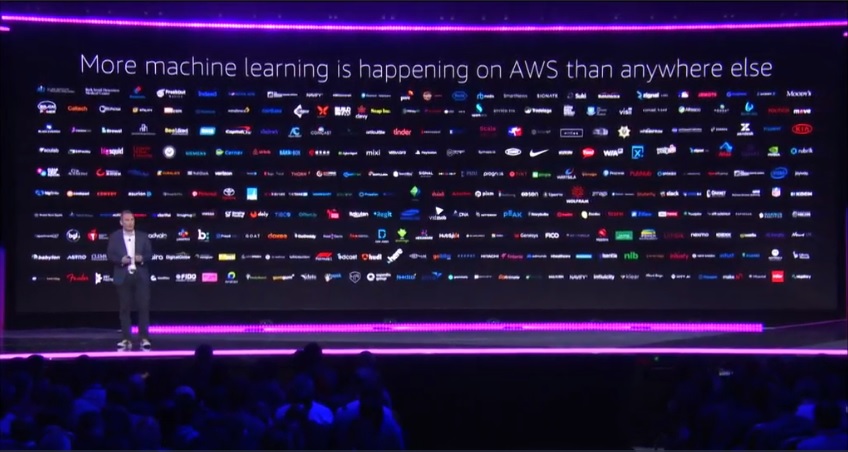 Again, the breadth of the portfolio was noted with three customer examples. For simpler iterations there is DynamoDB; Lyft uses it to coordinate passenger information and GPS coordinates. Airbnb uses ElastiCache for its single sign on (SSO) to be firing with microsecond latency. Nike used Neptune to build an app whereby athletes, their followers, and all their interests correlated. But if you have tables that fluctuate due to seasonality, or spikiness, then it’s a matter of guesswork knowing how to scale. The snappily-named Dynamo DB Read/Write Capacity On Demand aims to take care of that.

Perhaps the biggest cheer of the keynote came when Amazon Timestream was announced. The database can process trillions of events per day at one tenth of the cost of relational databases, and is focused on IoT and edge computing.

When it came to blockchain and machine learning, both saw leaps forward. Amazon Quantum Ledger Database (QLDB) – cited by Amazon CTO Werner Vogels as one of his favourite announcements – aims to solve the problem of providing a ledger with a trusted entity without having to surf through complicated functionality provided by blockchain frameworks. The second, Amazon Managed Blockchain, does what it says on the tin, supporting both Hyperledger Fabric and Ethereum. The company has certainly come a long way from this time last year when it said it wasn’t especially interested in the technology.

As far as machine learning went, Amazon SageMaker Ground Truth, which aims to help label data more accurately, and AWS Inferentia, a high-performance machine learning inference chip, stood out. Yet in one of the few nods to previous business, Ross Brawn, managing director of motor sports at Formula 1, took to the stage to expand on AWS’ partnership with the sporting giant first announced in July.

ML had been promised as a cornerstone at the time, and Brawn duly delivered. ‘F1 Insights Powered By AWS’ had been launched to some extent this season, providing more data as well as predictions on what may happen. This is being extended next season by further integrating telemetry data to predict performance and race strategy, as well as using HPC to simulate environments where slipstreams don’t knock out as much equilibrium of the preceding car, leading to closer racing. “These are insights the teams have always had – but we’re going to bring them out to the fans to show them what’s happening,” said Brawn.

Mindful perhaps that looking back rather than forward may have turned into a habit, the next segment was also the last. Pat Gelsinger, CEO of VMware, went on stage – much as Jassy had done during VMworld keynotes – to help launch AWS Outposts. In some way, the best – or perhaps most shocking – had been left till last. The company claims to deliver a ‘truly consistent hybrid experience’ by bringing AWS services, infrastructure and operating models to ‘virtually any’ on-premises facility. This can be achieved either as AWS-native, or running VMware Cloud on AWS.

“The breadth and scale of the AWS platform now, combined with the sheer velocity of new feature releases means that few firms on the planet are moving faster,” said Nick McQuire, VP enterprise at CCS Insight. “It bodes ominously for Microsoft and Google in the high stakes cloud wars.” 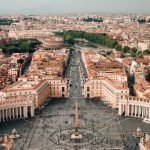