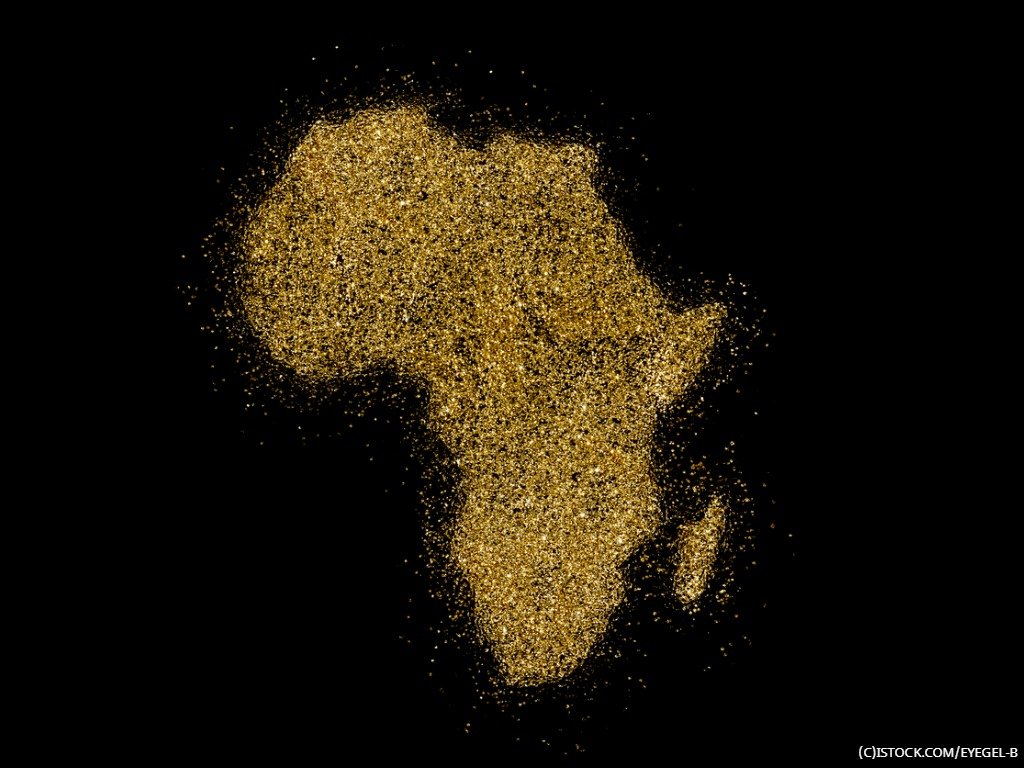 By James Bourne | 5th April 2019 | TechForge Media http://www.cloudcomputing-news.net/
James is editor in chief of TechForge Media, with a passion for how technologies influence business and several Mobile World Congress events under his belt. James has interviewed a variety of leading figures in his career, from former Mafia boss Michael Franzese, to Steve Wozniak, and Jean Michel Jarre. James can be found tweeting at @James_T_Bourne.

Take a look at the data centre footprint of the three largest cloud infrastructure vendors – Amazon Web Services (AWS), Microsoft Azure and Google Cloud – and you are met with a breathless marketing message.

Azure (picture below, middle) promises 54 regions worldwide – the terminology differs for each one – promising ‘more global regions than any other cloud provider.’ AWS’ cloud (top) ‘spans 61 availability zones within 20 geographic regions around the world’, while Google (bottom) promises 58 zones, 134 network edge locations and ‘availability in 200+ countries and territories’. 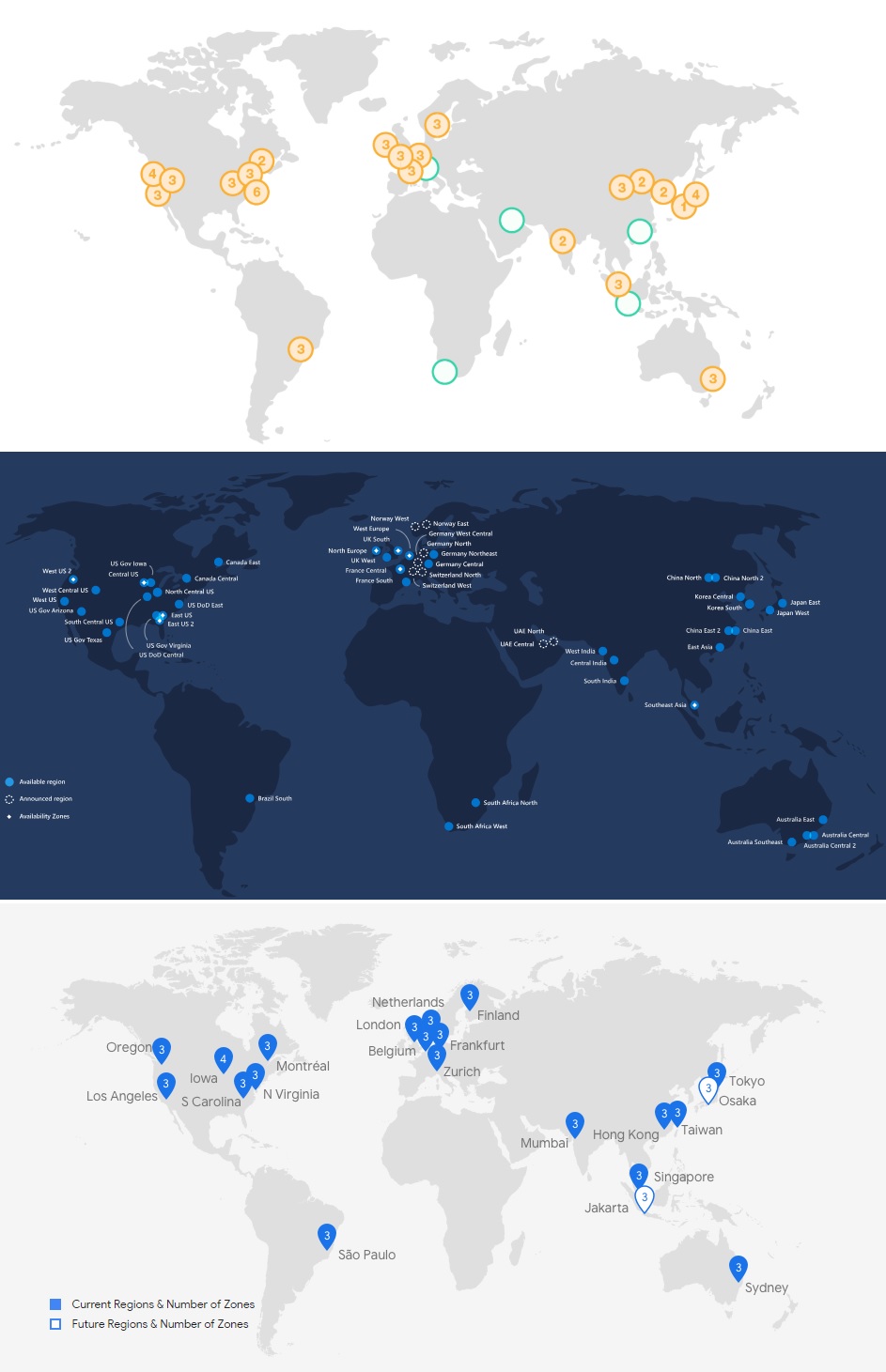 It does appear to be something of an oversight. Yet things are changing.

A recent report from Xalam Analytics, a US-based research and analysis firm, had explored the ‘rise of the African cloud.’ The study went live at the time Microsoft’s Johannesburg and Cape Town data centre sites were switched on, and has explored Africa’s ‘cloud readiness’, industry expectations, as well as its associated services.

Ultimately, the fact remains that, thus far, Africa has not been worth investing in. According to Xalam’s estimates, less than 1% of global public cloud services revenue was generated in the continent. This figure, the company adds, is lower than mobile operators’ revenue for SMS.

The report argued that only five of the 25 African countries analysed were considered ‘cloud-ready’; South Africa far at the top, Mauritius, Kenya, Tunisia and Morocco. 11 nations, including Egypt, Nigeria and Ivory Coast, were considered on the cusp of cloud-readiness.

This makes for an interesting comparison when put against the bi-annual cloud studies from the Asia Cloud Computing Association (ACCA). The overall landscape in Asia is one of contrasts. Those at the top, such as Singapore and Hong Kong, are considered global leaders. Those at the bottom, such as India and China, arguably share many of the failings of African countries; large land masses and poor connectivity. South Africa, ACCA estimated, would have placed just under halfway in the 14-nation Asian ranking, between Malaysia and The Philippines.

These issues are widely noted in the Xalam analysis. “Africa is a tricky place for cloud services,” the company wrote in a blog post. “Many countries don’t have broadband speeds adequate and affordable enough to support reliable cloud service usage. Where cloud services are built upon a reliance on third party providers, provider distrust is deeply ingrained in many African enterprises, having been nurtured by decades of failing underlying infrastructure and promises not kept.

“Where the public thrives on an open, decentralised Internet, many African governments profess a preference for a more centralised, monitored model – and some are prone to shutting down the Internet altogether,” the company added.

Guy Zibi, founder and principal of Xalam Analytics, said there were two other concerns uncovered in the research. “Data sovereignty concerns are prevalent; in most African markets, the sectors that typically drive the uptake of cloud services – financial, healthcare, and even the public sector – are not allowed to store user data out of the country,” he told CloudTech. “Given that there was no public cloud data centre in the region and local options were not entirely trusted, this naturally impacted uptake.

“There is [also] still a fair amount of distrust in the ability of third-party providers to manage mission-critical enterprise workloads,” added Zibi. “In many countries, the underlying supporting infrastructure – power primarily – has historically been shaky, making it difficult for providers to provide quality services. That lack of trust has long held up the expansion of third-party managed services, including cloud services.”

Yet the winds of change – “trust levels are improving but there’s some way to go, and from a low base”, as Zibi put it – are prevalent. Alongside Microsoft’s newly-opened data centre complexes in South Africa, AWS is planning a region in Cape Town. Zibi said the launch was a ‘game-changer’ and a ‘seminal event for African cloud services.’

“It did four things in our view,” he said. “It offered validation from one of the world’s largest cloud providers that there was deep enough cloud demand in the region and a credible economic case to support this type of investment. It suggested that the underlying supporting infrastructure – South Africa’s at least – was solid enough to support a hyperscale data centre, and it probably accelerated local service deployment timelines by competitors like AWS and Huawei.

“It [also] gave more confidence to local corporate customers that they could start moving to the cloud more aggressively,” Zibi added.

Naturally, as these things are announced, customers are asked if they could tell their stories. Microsoft gave three examples of companies utilising cloud services. Nedbank, Microsoft said, had ‘adopted a hybrid and multi-vendor cloud strategy’ with Microsoft an ‘integral’ partner, eThekwini Water was using Azure for critical application monitoring and failover among other use cases, while The Peace Parks Foundation was utilising rapid deployment of infrastructure as well as offering radio over Internet protocol – ‘a high-tech solution to a low-tech problem’ – to improve radio communication over remote and isolated areas.

Zibi noted that the facets binding the cloud-ready African nations together was strong adoption of high speed broadband, adequate power supply, good data infrastructure and solid regulations fostering adoption of cloud services. While Azure and AWS are the leaders, Google is seen by Xalam only as a challenger. In a move that is perhaps indicative of the state of play in African IT more generally, Oracle and IBM – alongside VMware – are the next strongest providers.

The report predicted that top line annual cloud services revenue in Africa is set to double between now and 2023, and public cloud services revenue to triple in that time. The barriers understandably remain in such a vast area, but the upside is considerable. “Few other segments in the African ICT space are as likely to generate an incremental $2bn in top line revenue over the next five years, and at least as much in adjacent enabling ecosystem revenue,” the company noted.

“But the broader upside is unmistakable, and the battle for the African cloud is only beginning.”

You can find out more about the report here (customer access only).