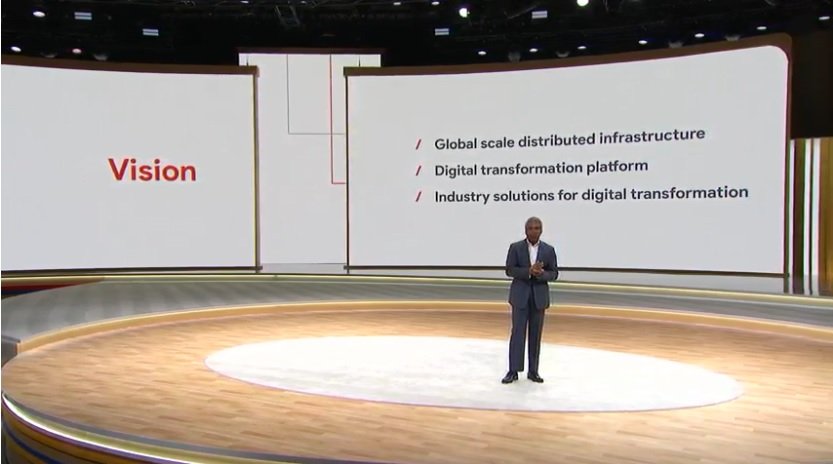 By James Bourne | 9th April 2019 | TechForge Media http://www.cloudcomputing-news.net/
Categories: Google, Infrastructure, OpenSource,
James is editor in chief of TechForge Media, with a passion for how technologies influence business and several Mobile World Congress events under his belt. James has interviewed a variety of leading figures in his career, from former Mafia boss Michael Franzese, to Steve Wozniak, and Jean Michel Jarre. James can be found tweeting at @James_T_Bourne.

Analysis Google Cloud means open, hybrid and multi-cloud. The company took the keynote at Next in San Francisco to offer more flexibility with using other vendors such as Amazon Web Services (AWS) – but that’s where the familiarity ended.

The biggest product news to come out of the session was moving its cloud services platform, rebranded as Anthos, to accommodate AWS and Microsoft Azure. Anthos lets users “build and manage modern hybrid applications across environments” through Kubernetes, as the official page puts it. With a cast list as long as one’s arm – more than 35 partners were cited on a slide, with Cisco and VMware, more on whom shortly, among the highlights – the goal was for Anthos to be ‘simple, flexible and secure.’

Google Cloud chief exec Thomas Kurian – who has only been in the role for 10 weeks but, as boss Sundar Pichai put it, whose productivity was stretching Calendar and G Suite – noted the multi-cloud move came through listening to customers. Customers wanted three things; firstly hybrid, secondly multi-cloud, and finally a platform that “allows them to operate this infrastructure without complexity and to secure and manage across multiple clouds in a consistent way”, he added. The live demonstration came with a twist; the workload was being run on AWS.

In terms of partner news, the best was saved until last. Google Cloud announced partnerships with seven open source vendors (below) in what Kurian described as the ‘first integrated open source ecosystem.’ “What this allows you to do, as a developer or customer, is to use the best of breed open source technology, procure them using standard Google Cloud credits, and get a single console [and] bill from Google,” said Kurian. “We support these along with partners and, as you grow, as you use these technologies, you share this success with our partners.”

The CEOs of six of these companies – Confluent, DataStax, Elastic, InfluxData, MongoDB and Neo4j – appeared in a video exhorting Google’s approach to OS. The seventh, Redis Labs chief executive Ofer Bengal, appeared on stage with Kurian. “This is great for us because, as you know, monetising open source was always a very big challenge for open source vendors and more so in the cloud era,” he said, adding that Google had taken a ‘different approach’ from other cloud vendors.

Why this matters is, as regular readers of this publication will know, because of a long-running grumble between the open source companies and cloud vendors. Late last year, Confluent announced it was changing certain aspects of its license. Users could still download, modify and redistribute the code, but not – with one eye on the big cloud vendors – use it to build software as a service.

In February, Redis announced a further modification to its license. Speaking to CloudTech at the time, Bengal noted that, AWS aside, ‘the mood [was] trying to change’ and, as this publication put it, ‘inferred that partnerships between some cloud providers and companies behind open source projects may not be too far away.’

With that question now solved, it was interesting to note the way Google approached discussing its customer base – and it is here where another potential flashpoint could be analysed.

Google frequently cited three industries as key to its customer base; retail, healthcare, and financial services. More than once did the company note it worked with seven of the top 10 retailers. This is noteworthy because, as many industry watchers will recall, retail organisations have made noises about moving away from AWS for fears over Amazon’s retail arm. This has ranged from a full-throated roar in the case of Walmart, to more of a mid-range mew from Albertson’s after the latter signed a deal with Microsoft in January.

Kurian cited this ‘industry cloud’ capability as one of Google’s three bulwarks with regards to its strategy. Building out its global infrastructure was seen as key, with Google CEO Sundar Pichai announcing two new data centre locations in Seoul and Salt Lake City. Pichai added, to illustrate the scale of Google’s expansion, that in 2013 the company’s planned footprint amounted to two Eiffel Towers in terms of steel. Today, this has been expanded to at least 20. The other aspect was around offering a digital transformation path augmented by Google’s AI and machine learning expertise.

From the partner side David Goeckeler, EVP and GM of Cisco’s networking and security business, noted how the two companies had a similar forward-looking feel to cloud deployments. Cloud had traditionally been very application-centric, which was a fair strategy, he noted. But the move has gone from there to having apps in the data centre, at the edge and more – and connecting all these users means enterprises have had to rearchitect for the demands of cloud.

“We start with the premise of hybrid and multi-cloud – the realities of the environment where all of our customers are living today,” he said. Sanjay Poonen, chief operating officer at VMware, noted VMware and Google had ‘embraced Kubernetes big time’, particularly through the acquisition of Heptio, and that alongside the deal for VeloCloud, there was a rosy future for the two companies in network. Poonen added many of the benefits of Anthos will extend to hyperconverged infrastructure – an area he had been recently grandstanding in typically ebullient style.

Various new customers were also announced, from retail in the shape of Kohl’s, to healthcare in the form of Philips, and Chase and ANZ Bank from finance. Philips group CIO Alpna Doshi took to the stage to say it had put 2000 apps on Google’s cloud.

Kurian made his speaking debut as Google Cloud boss in February at a Goldman Sachs conference in San Francisco. The talk focused predominantly around Google’s enterprise-laden focus, with Kurian citing out larger, more traditional companies – a continual weakness for the company’s cloud arm – as well as exploring deals with systems integrators.

In November, when it was announced that Diane Greene would step down and Kurian would replace her, consensus at the time predominantly revolved around Google’s lack of penetration to the top two in cloud infrastructure – namely Azure and AWS. However, this wasn’t an exclusive view. Speaking to this publication at the time Nick McQuire, VP enterprise at CCS Insight, argued that Greene had “laid some pretty good foundations for Kurian to come in…we’ll see where they go from there.”

It would seem from today’s keynote that a much clearer path has been set. “Thomas Kurian’s message from day one is loud and clear: Google Cloud is taking hybrid and now multi-cloud very seriously,” said McQuire. “Enterprises continue to question whether to fully embrace a single public cloud – which workloads are best to ‘lift and shift’ from a cost, security and compliance perspective – or how to avoid supplier lock-in, one of their biggest concerns at the moment.

“With the arrival of Anthos and in particular its support of open source, particularly Kubernetes, Google is now taking a much more realistic path in meeting customers where they are on their cloud journeys and is aiming to become the standard in hybrid, multi-cloud services in this next phase of the cloud market,” McQuire added.

You can find out more about Google Next 19 here.