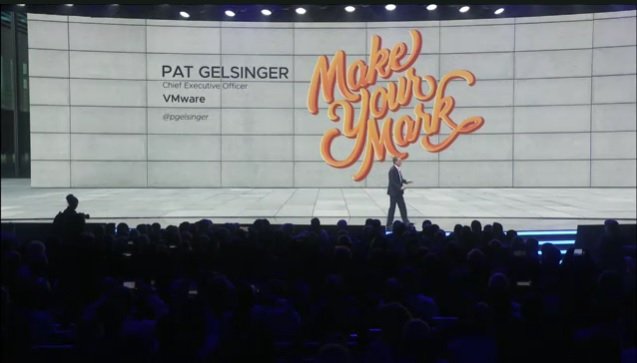 By James Bourne | 26th August 2019 | TechForge Media http://www.cloudcomputing-news.net/
Categories: Applications, Hybrid, Migration, Software, Vendors, Virtualisation, VMware,
James is editor in chief of TechForge Media, with a passion for how technologies influence business and several Mobile World Congress events under his belt. James has interviewed a variety of leading figures in his career, from former Mafia boss Michael Franzese, to Steve Wozniak, and Jean Michel Jarre. James can be found tweeting at @James_T_Bourne.

VMware has kicked off its 2019 VMworld US jamboree in San Francisco with a series of updates, spanning Kubernetes, Azure, security and more.

The virtualisation and end user computing giant issued no fewer than five press releases to the wires alone today, with CEO Pat Gelsinger and COO Sanjay Poonen continuing to emphasise the company's 'any cloud, any application, any device, with intrinsic security' strategy.

Chief of these on the product side was around VMware Tanzu, a new product portfolio which aims to enable enterprise-class building, running, and management of software on Kubernetes. Included in this is Project Pacific, which is an ongoing mission to rearchitect server virtualisation behemoth vSphere with the container orchestration tool.

Except to call Kubernetes a container orchestration tool would be doing it a major disservice, according to Gelsinger. Not since Java and the rise of virtual machines has there been a technology as critical for cloud since Kubernetes, he noted, in connecting developers and IT ops. This is evidently the goal of Project Pacific as well. Tanzu, we were told, is both Swahili for branch – as in a new branch of innovation – and the Japanese word for container.

Other product news included an update to collaboration program Workspace ONE, including an AI-powered virtual assistant, as well as the launch of CloudHealth Hybrid by VMware. The latter, built on cloud cost management tool CloudHealth, aims to help organisations save costs across an entire multi-cloud landscape and will be available by the end of Q3.

Analysis: Pick a cloud, any cloud

VMware's announcement of an extended partnership with Google Cloud earlier this month led this publication to consider the company's positioning amid the hyperscalers. VMware Cloud on AWS continues to gain traction – Gelsinger said Outposts, the hybrid tool announced at re:Invent last year, is being delivered upon – and the company also has partnerships in place with IBM and Alibaba Cloud.

Today, it was announced that VMware in Microsoft Azure was generally available, with the facility gradually being switched on across Azure data centres. By the first quarter of 2020, the plan is for availability across nine global areas.

The company's decision not to compete, but collaborate with the biggest public clouds is one that has paid off. Yet Gelsinger admitted that the company may have contributed to some confusion over what hybrid cloud and multi-cloud truly meant. The answer (below) was interesting. 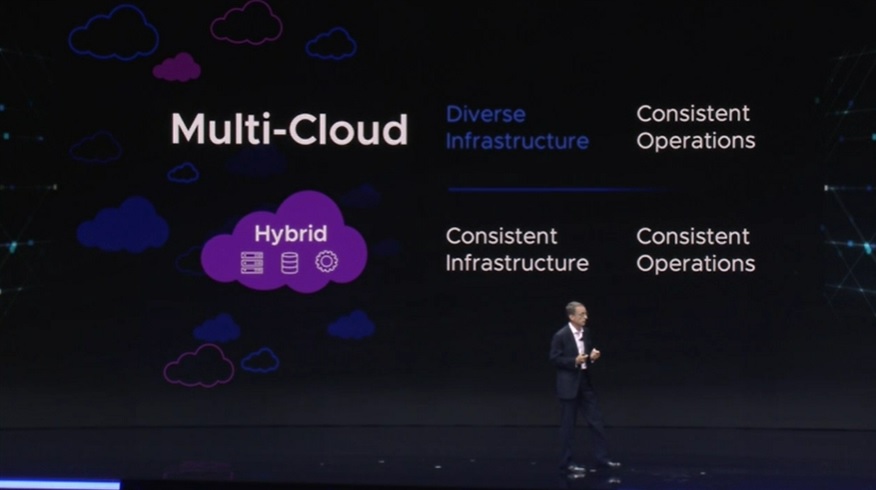 Increasingly, with organisations opting for different clouds for different workloads, and changing environments, Gelsinger honed in on a frequent customer pain point for those nearer the start of their journeys. Do they migrate their applications or do they modernise? Increasingly, customers want both – the hybrid option. "We believe we have a unique opportunity for both of these," he said. "Moving to the hybrid cloud enables live migration, no downtime, no refactoring… this is the path to deliver cloud migration and cloud modernisation."

As far as multi-cloud was concerned, Gelsinger argued: "We believe technologists who master the multi-cloud generation will own it for the next decade."

There were interesting customer stories afoot – particularly down to the scale and timeframe of their initiatives. FedEx has its fingers in many pies, from VMware Cloud on AWS, to VMware Cloud Foundation, to Pivotal – on whom more shortly.

Research firm IHS Markit was what Gelsinger called "a tremendous example of a hybrid cloud customer." The company's goal was to have 80% of its applications in the public cloud, with the result of being able to migrate 1000 applications in six weeks. Poonen asked Freddie Mac about how many of its 600 apps the financier was migrating. The answer: all of them, bar a negligible few. The initiative started in February, and the plan was to be finished 'by Thanksgiving.'

On the partnership side, VMware announced a collaboration with NVIDIA for the latter to deliver accelerated GPU services for VMware Cloud on AWS. This was again cited as key to enterprise customers to make the most of their huge swathes of data, while the move also links in with VMware's acquisition of Bitfusion, enabling the company to efficiently make GPU capabilities available for AI and ML workloads in the enterprise.

Gelsinger made special note to mention VMware's most recent acquisitions, with Pivotal and Carbon Black being name-checked at the front of the keynote and brought on to discuss where they fit in the VMware stack at the back.

Pat Gelsinger is rapidly turning into a must-listen speaker with regards to the future of technology, its convergence, and its ethical effects.

This is not to say previous VMworld talks aren't worth your time, of course. Gelsinger has done seven big US events now – seven and a half if you include 2012 when former CEO Paul Maritz was handing over the reins. Yet today he sits in a fascinating position across cloud, network and more, to assess the landscape.

The opening 2019 VMworld keynote had everything one would expect; customer success stories by the cartload and product announcements by the pound, as seen above. Yet underpinning it was an ethical fix. "As technologists, we can't afford to think of technology as someone else's problem," Gelsinger told attendees, adding VMware puts 'tremendous energy into shaping tech as a force for good.'

Gelsinger cited three benefits of technology which ended up opening Pandora's Box. Free apps and services led to severely altered privacy expectations; ubiquitous online communities led to a crisis in misinformation; while the promise of blockchain has led to illicit uses of cryptocurrencies. "Bitcoin today is not okay, but the underlying technology is extremely powerful," said Gelsinger, who has previously gone on record regarding the detrimental environmental impact of crypto.

This prism of engineering for good, alongside good engineering, can be seen in how emerging technologies are being utilised. With edge, AI and 5G, and cloud as the "foundation… we're about to redefine the application experience," as the VMware CEO put it. 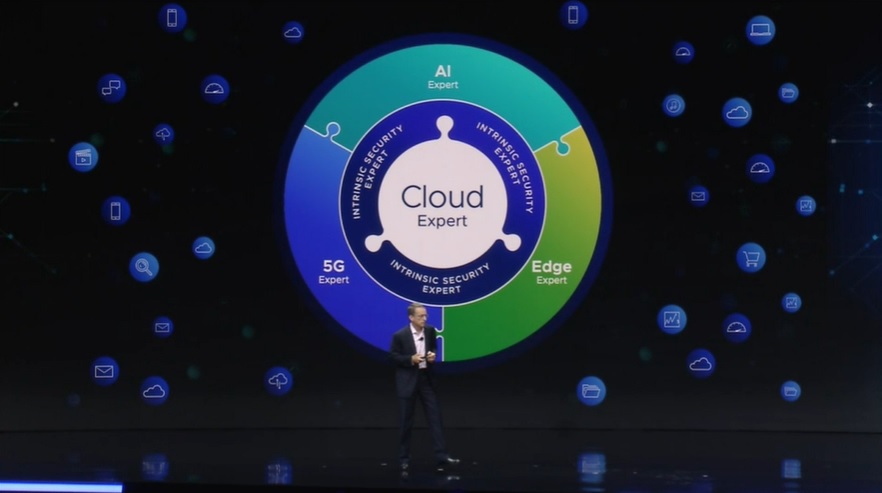 2018's keynote was where Gelsinger propagated the theme of tech 'superpowers'. Cloud, mobile, AI, and edge were all good on their own, but as a cyclical series could make each other better. This time, more focus was given to how the edge was developing. Whether it was a thin edge, containing a few devices and an SD-WAN connection, a thick edge of a remote data centre with NFV, or something in between, VMware aims to have it all covered.

"Telcos will play a bigger role in the cloud universe than ever before," said Gelsinger, referring to the rise of 5G. "The shift from hardware to software [in telco] is a great opportunity for US industry to step in and play a great role in the development of 5G."

Reaction: Collaboration between VMware and the hyperscalers – but for how long?

If VMware was at all concerned about the impact of its AWS partnership, the company needn't have worried. One other piece of news was a research study put together alongside Forrester around the total economic impact of VMware Cloud on AWS.

Speaking directly after the keynote Bruce Milne, CMO at hyperconverged infrastructure provider Pivot3, praised the strategic approach – but with something of a caveat.

"Pat Gelsinger in his keynote illustrated that [VMware] is not content to rest on its laurels and continue to push the boundaries of technology through development, acquisition and partnerships," Milne told CloudTech. "Software is eating the world, as the old maxim goes, and that was evident through his discussion. He challenged customers to look at the economic benefit of refreshing their hardware and saving money through virtualisation with NSX, [and] declared that VMware is serious about integrating Kubernetes into vSphere, which empowers app developers who may be developing for the cloud or on-prem.

"There's an obvious strategic tension in VMware's collaboration with the hyperscale cloud providers, but for now it appears they've agreed to a collaborative detente," added Milne. "Watch this space because that friction is sure to generate sparks eventually. VMware wants to be the facilitating platform for apps on 'any cloud' – clearly a space that the hyperscale vendors covet as well."

You can take a look at the full list of VMworld 2019 announcements here.

Postscript: A keenly raised eyebrow from this reporter came when Gelsinger referred to William Hill, an NSX customer, as an 'online gaming company'. UK readers in particular will note that this isn't quite telling the whole truth – but let's just say it emphasises the difference between holding your events in San Francisco and Las Vegas.