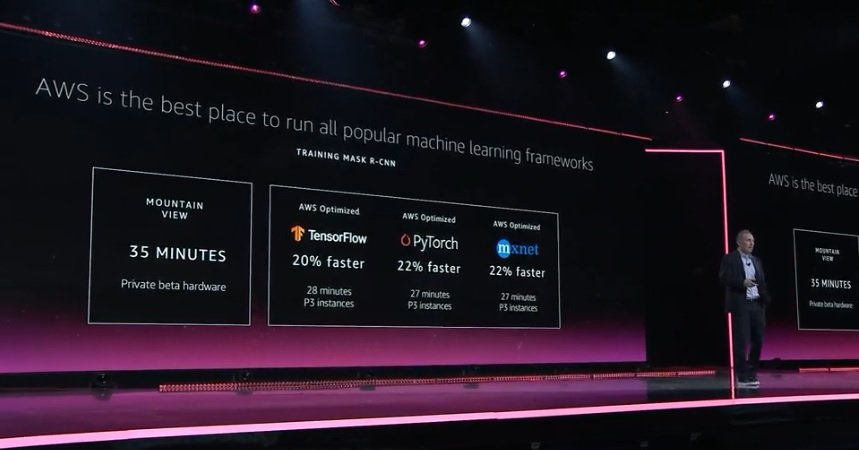 By James Bourne | 3rd December 2019 | TechForge Media http://www.cloudcomputing-news.net/
Categories: AWS, Data & Analytics, Infrastructure, Software,
James is editor in chief of TechForge Media, with a passion for how technologies influence business and several Mobile World Congress events under his belt. James has interviewed a variety of leading figures in his career, from former Mafia boss Michael Franzese, to Steve Wozniak, and Jean Michel Jarre. James can be found tweeting at @James_T_Bourne.

“If you wake up on a Casper mattress, work out with a Peloton before breakfast, Uber to your desk at a WeWork, order DoorDash for lunch, take a Lyft home, and get dinner through Postmates,” wrote The Atlantic’s Derek Thompson in October, “you’ve interacted with seven companies that will collectively lose nearly $14 billion this year.”

It is a well-worn line, and as WeWork’s collapse showed, there is plenty of pushback when it comes to the gig economy champions. Yet at the start of his re:Invent keynote today, Amazon Web Services (AWS) CEO Andy Jassy cited Uber, Lyft and Postmates, as well as Airbnb, as examples of the overall keynote theme around transformation. “These startups have disrupted longstanding industries that have been around for a long time from a standing start,” said Jassy.

An eyebrow-raising opening, perhaps. Yet, backed by the re:Invent band once more with half a dozen songs ranging from Van Halen to Queen – AWS has heard of the former even if Billie Eilish hasn’t – the rationale was straightforward. If you’re making a major transformation, then you need to get your ducks in a row; senior leadership needs to be on board, with top-down aggressive goals and sufficient training.

“Once you decide as a company that you’re going to make this transition to the cloud, your developers want to move as fast as possible,” said Jassy. This beget the now-standard discussion around the sheer breadth of services available to AWS customers – more than 175 at the most recent count – with Jassy noting that certain unnamed competitors were ‘good at being checkbox heroes’ but little else.

This was not the only jibe the AWS chief exec landed on the opposition. From transformation, another key element for discussion was around modernisation. This was illustrated by a ‘moving house’ slide (below) which was self-explanatory in its message. Jassy took extra time to point out the mainframe and audit notices. While IBM and particularly Oracle have been long-term targets, the Microsoft box is an interesting addition. Jassy again noted AWS’ supremacy with regard to Gartner’s IaaS Magic Quadrant – adding the gap between AWS and Microsoft was getting bigger. 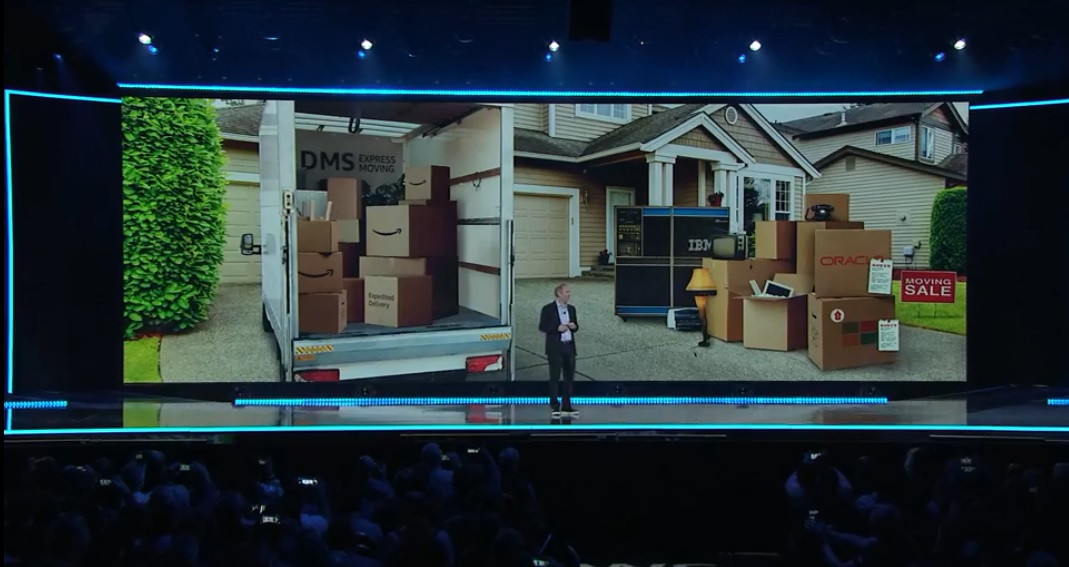 Last year, the two big headlines were around blockchain and hybrid cloud. Amazon Managed Blockchain did what it said on the tin, but AWS Outposts aimed to deliver a ‘truly consistent experience’ by bringing AWS services, infrastructure and operating models to ‘virtually any’ on-prem facility. Google Cloud’s launch – or relaunch – of Anthos was seen as a move in the same vein, while Azure Arc was seen by industry watchers as Microsoft’s response.

This is prescient as plenty of the product updates could be seen as an evolution of 2018’s re:Invent announcements. Instead of storage, Jassy this time focused on compute; instances and containers.

One piece of news did leak out last week around AWS building a second-generation custom server chip – and this was the first announcement which Jassy confirmed. The M6g, R6g, and C6g Instances for EC2 were launched based on the AWS Graviton 2 processors. “These are pretty exciting, and they provide a significant improvement over the first instance of the Graviton chips,” said Jassy. Another instance launch was seen as another upgrade. While AWS Inferentia was launched last year as a high-performance machine learning inference chip, this year saw Inf1 Instances for EC2, powered by Inferentia chips.

On the container side, AWS expanded its offering with Amazon Fargate for Amazon EKS. Again, the breadth of options to customers was emphasised; Elastic Container Services (ECS) and EKS, or Fargate, or a mix of both. “Your developers don’t want to be held back,” said Jassy. “If you look across the platform, this is the bar for what people want. If you look at compute, [users] want the most number of instances, the most powerful machine learning inference instances, GPU… biggest in-memory… access to all the different processor options. They want multiple containers at the managed level as well as the serverless level.

“That is the bar for what people want with compute – and the only ones who can give you that is AWS.”

Jassy then moved to storage and database, but did not stray too far from his original topic. Amazon Redshift RA3 Instances with Managed Storage enables customers to separate storage from compute, while AQUA (Advanced Query Accelerator) for Amazon Redshift flips the equation entirely. Instead of moving the storage to the compute, users can now move compute to the storage. “What we’ve built with AQUA is a big high-speed cache architecture on top of S3,” said Jassy, noting it ran on a souped-up Nitro chip and custom-designed FGPAs to speed up aggregations and filtering. “You can actually do the compute on the raw data without having to move it,” he added.

Summing up the database side, the message was not simply one of breadth, but one that noted how a Swiss Army knife approach would not work. “If you want the right tool for the right job, that gives you different productivity and experience, you want the right purpose-built database for that job,” explained Jassy. “We have a very strong belief inside AWS that there is not one tool to rule the world. You should have the right tool for the right job to help you spend less money, be more productive, and improve the customer experience.” 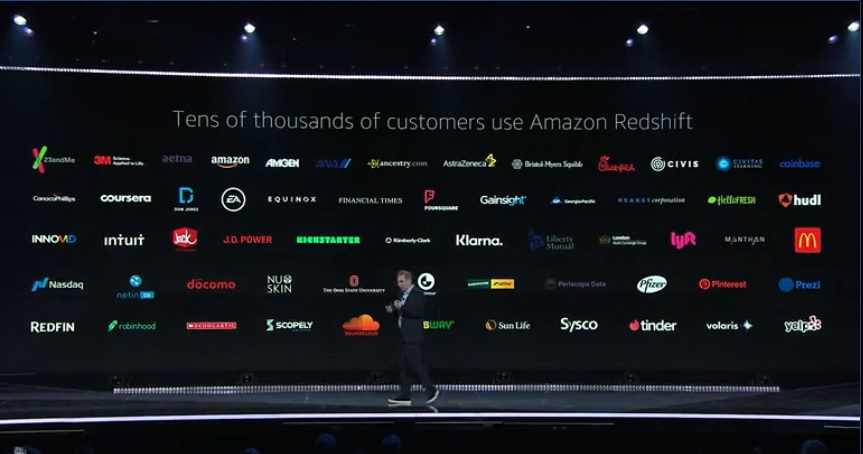 While various emerging technologies were announced and mentioned in the second half of last year’s keynote, the big gotcha arrived the day before. Amazon Braket, in preview today, is a fully managed AWS service which enables developers to begin experimenting with computers from quantum hardware providers in one place, while a partnership has been put in place between Amazon and the California Institute of Technology (Caltech) to collaborate on the research and development of new quantum technologies.

On the machine learning front, AWS noted that 85% of TensorFlow running in the cloud runs on its platform. Again, the theme remained: not just every tool for the job, but the right tool. AWS research noted that 90% of data scientists use multiple frameworks, including PyTorch and MXNet. AWS subsequently has distinct teams working on each framework.

For the pre-keynote products, as sister publication AI News reported, health was a key area. Transcribe Medical is set to be utilised to move doctors’ notes from the barely legible script to the cloud, and is aware of medical speech as well as standard conversation. Brent Shafer, the CEO of Cerner, took to the stage to elaborate on ML’s applications for healthcare.

With regard to SageMaker, SageMaker Operators for Kubernetes was previously launched to let data scientists using Kubernetes train, tune, and deploy AI models. In the keynote, Jassy also introduced SageMaker Notebooks and SageMaker Experiments as part of a wider Studio suite. The former offered one-click notebooks with elastic compute, while the latter allowed users to capture, organise and search every step of building, training, and tuning their models automatically. Jassy said the company’s view of ML ‘continued to evolve’, while CCS Insight VP enterprise Nick McQuire said from the event that these were ‘big improvements’ to AWS’ main machine learning product.

As the Formula 1 season came to a close at the weekend, the timing was good to put forth the latest in the sporting brand’s relationship with AWS. Last year, Ross Brawn took to the stage to expand on the partnership announced a few months before. This time, the two companies confirmed they had worked on a project called Computational Fluid Dynamics Project; according to the duo more than 12,000 hours of compute time were utilised to help car design for the 2021 season.

Indeed, AWS’ strategy has been to soften the industry watchers up with a few nice customer wins in the preceding weeks before hitting them with a barrage at the event itself. This time round, November saw Western Union come on board with AWS its ‘long-term strategic cloud provider’, while the Seattle Seahawks became the latest sporting brand to move to Amazon’s cloud with machine learning expertise, after NASCAR, Formula 1 and the LA Clippers among others.

At the event itself, the largest customer win was Best Western Hotels, which is going all-in on AWS’ infrastructure. This is not an idle statement, either: the hotel chain is going across the board, from analytics to machine learning, the standard database, compute and storage, as well as consultancy.

This story may be updated as more news breaks.