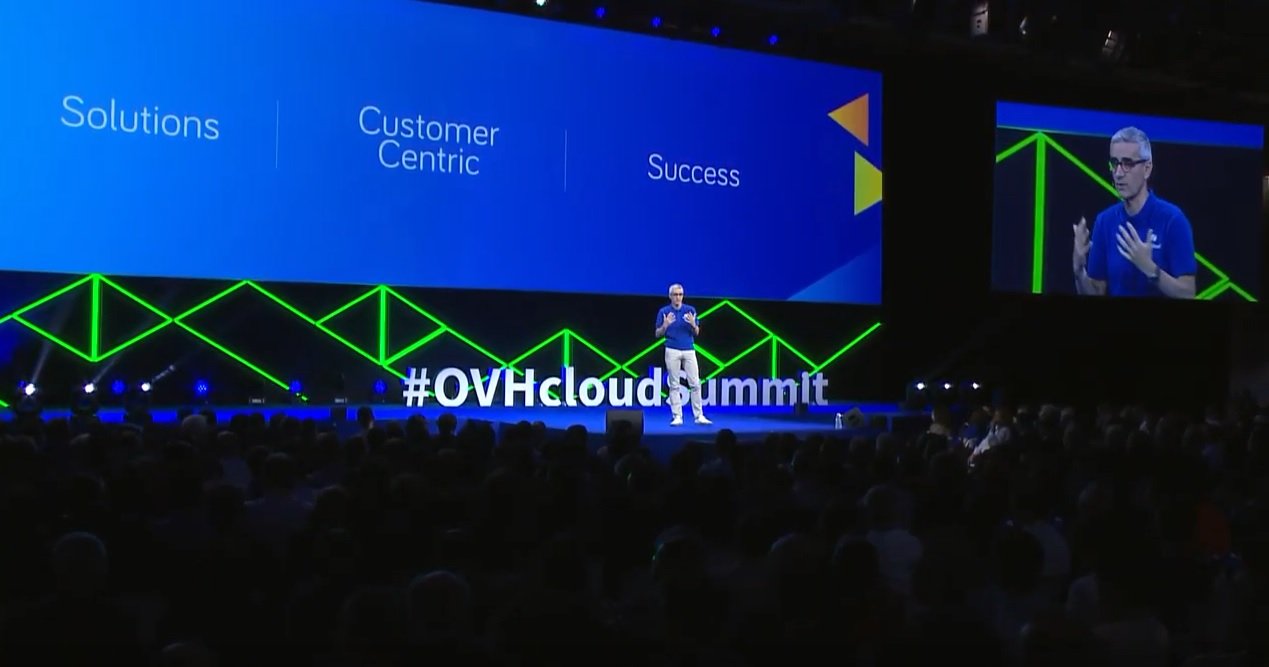 By James Bourne | 11th October 2019 | TechForge Media http://www.cloudcomputing-news.net/
Categories: Europe, Infrastructure, Trends,
James is editor in chief of TechForge Media, with a passion for how technologies influence business and several Mobile World Congress events under his belt. James has interviewed a variety of leading figures in his career, from former Mafia boss Michael Franzese, to Steve Wozniak, and Jean Michel Jarre. James can be found tweeting at @James_T_Bourne.

OVH has announced it is changing its name to OVHcloud to mark the company’s 20th birthday – and double down on its ambitions.

The move was announced at OVH's annual jamboree, renamed this year from #OVHSummit to #OVHcloudSummit.

The company has long-held a goal to provide an alternative to the cloud hyperscalers for the European market. OVHcloud cites clarity as the primary reason for changing name: the company claims more than 70% of its revenue is ‘focused on cloud solutions.’ “By adopting the name OVHcloud, the group is aligning its identity with its business development strategy, in order to support its international growth,” the press materials note.

OVHcloud’s primary marketing is an acronym around the ‘smart’ cloud: any solution needs to be simple to implement, multi-local, accessible and predictable, reversible and open, and transparent. It is the reversibility – to ensure organisations avoid bill shock and vendor lock-in, which is particularly key, according to CEO Michel Paulin.

In a recent interview with CIO India (cached), Paulin outlined the rationale, while not naming names. “Many cloud players make it difficult or impossible for their customers to move their data out of the cloud. However we believe that customers should be free to move the data out as and when they want,” said Paulin. “The concept of reversibility is not just beneficial for the customers in the long term but will also make the multi-cloud strategy feasible.”

Writing for this publication in February, Paulin expanded further on his company’s multi-cloud ethos. “From speaking to our customers, combining on-premise and cloud infrastructure with a multi-cloud strategy has allowed them to connect to networks in a totally isolated and secure way, via numerous points of presence around the world,” Paulin wrote.

“What’s more, I’ve noticed how it has allowed organisations to shift to the cloud at their own pace and take a flexible approach – all while responding to their strategic objectives,” Paulin added. “This means businesses can control and run an application, workload, or data on any cloud based on their individual technical requirements.”

OVHcloud is looking at various industries, as well as smaller businesses, to help it differentiate. The company’s Cloud Web hosting product line, for instance, is aimed at developers and agencies. At the other end of the scale the company is promising an enriched bare metal portfolio for its enterprise solution base to provide greater performance and automation capabilities.

While Paulin noted in a statement that the company wants its brand to reflect the reality of cloud around the world, industry watchers may be wary of such nomenclature. In the much more nascent blockchain space, companies have been adding the buzzword to their name before changing their mind. The most recent was Blockchain Power Trust, which changed its name last week to Jade Power Trust after the company officially ceased cryptocurrency mining operations.

You can view the full #OVHcloudSummit keynote here (English version).