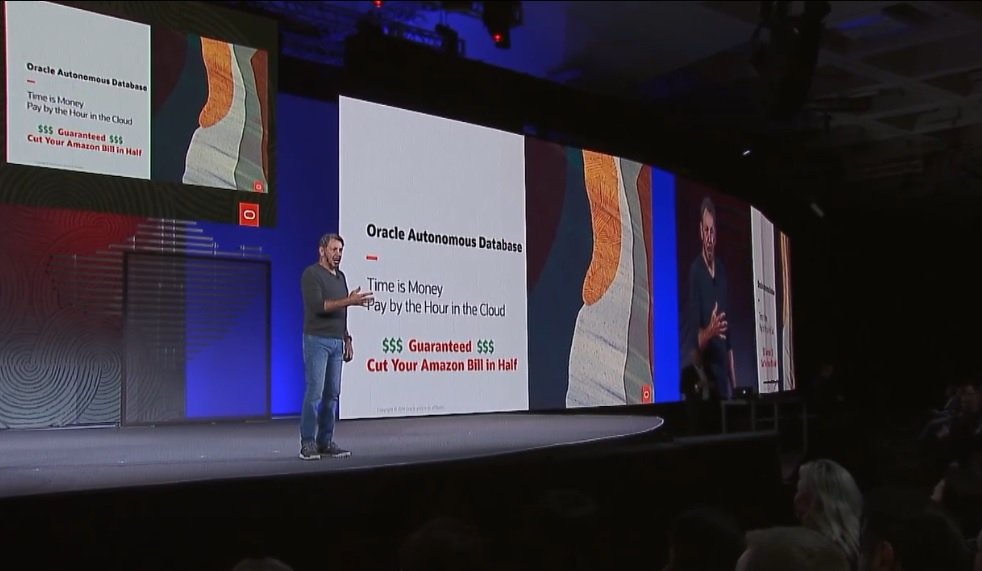 By James Bourne | 17th September 2019 | TechForge Media http://www.cloudcomputing-news.net/
Categories: Applications, Data & Analytics, Infrastructure, Security, Software,
James is editor in chief of TechForge Media, with a passion for how technologies influence business and several Mobile World Congress events under his belt. James has interviewed a variety of leading figures in his career, from former Mafia boss Michael Franzese, to Steve Wozniak, and Jean Michel Jarre. James can be found tweeting at @James_T_Bourne.

The concept of shared responsibility in cloud computing is one which continues to be, if not so much a rancour, an ongoing concern. In February, for instance, research from Check Point Software found that, for more than a quarter of respondents, cloud security was the provider’s responsibility.

Oracle is looking to make this a thing of the past with its autonomous database, as the company outlined at OpenWorld in San Francisco this week. While the autonomous database is something which has been long-discussed, the implications for cloud security were interesting, as CTO Larry Ellison explained.

“Amazon takes what I think is a very reasonable position,” Ellison told delegates. “You misconfigured the system, that’s your mistake, we at Amazon can’t be held responsible. If you spend the night drinking and then get into your Ford 150 and crash it, that’s not Ford’s problem.”

For regular viewers of Ellison’s keynotes, it won’t surprise that this was about the only positive word said about the Seattle giant all hour. And as Ellison continued the Ford analogy, an autonomous Tesla – where the Oracle CTO sits on the board as of the start of this year – would drive you home safely.

“Amazon’s support policy is very clear,” said Ellison. “As a customer, you maintain full control of your content and responsibility for configuring access to AWS services. That’s on you. In the AWS cloud, if you make an error, and it leads to catastrophic data loss, that’s on you. In the Oracle cloud, the database automatically provisions itself, it automatically encrypts itself, backs itself up, all the security systems are automatic. 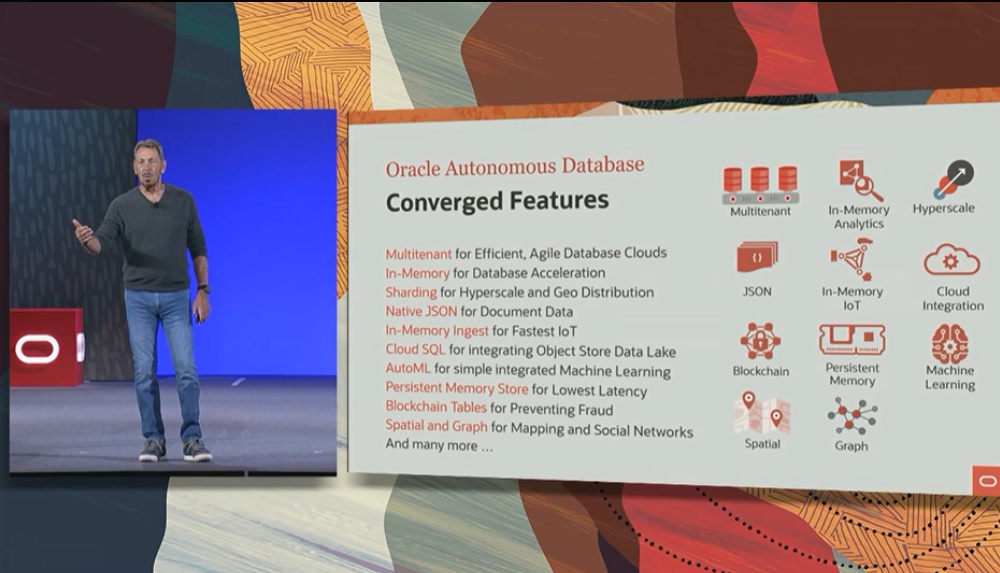 More comparisons with Amazon arrived when Ellison touting the ‘convergence’ features of Oracle’s autonomous database. Whereas the smartphone became an all-in-one covering cameras and calendars among dozens more, can’t there be one database to rule them all? Oracle thinks so: its offering can be a relational database, in-memory, support JSON, and even support machine learning and blockchain, Ellison claimed.

It’s autonomous almost-everything at Oracle towers these days, with the launch of Autonomous Linux high on the priority list – if a long time in coming. Oracle’s version of Linux, which Ellison said the company has been working on for two decades, is now being claimed as the first autonomous operating system in the world. Ellison compared this with IBM and Red Hat’s offering, noting that in 15 years not one single Red Hat incompatibility bug has been filed with Oracle’s Linux offering. The press materials described this as ‘a major milestone in the company’s autonomous strategy’.

Some aspects of the keynote went against the grain. Ellison gave an update on Oracle’s cloudy partnership with Microsoft, saying the latter had ‘a lot of good technology.’ The collaboration, first announced in June as one of the more surprising stories of the year, found the two companies coming together to connect Azure and Oracle Cloud data centres seamlessly. As this publication noted at the time, two of the three customers mentioned were Albertsons and Gap Inc – with retailers being a cause where Microsoft and Oracle can team up against a common enemy.

Another for the eyebrow-raising category was the launch of Oracle Cloud Free Tier, where organisations of any size, developers, and students can ‘build, learn and explore the full functionality of Oracle Autonomous Database and Oracle cloud infrastructure’, as the company put it. Ellison frequently noted that there was little to learn in Oracle’s autonomous database as, well, it does everything itself, but the ‘always free’ element is intriguing.

In total, users can utilise two Oracle autonomous databases of their choice, with 1 OCPU and 20 GB of storage capacity, two block storage volumes at 100 GB total, and 10 GB of object and archive storage, and two virtual machines with 1/8 OPCU and 1GB of memory each, alongside a smattering of extras.

Oracle also promised to launch 20 new cloud regions by the end of 2020, making a total of 36. The press materials indicated that at least part of this number will be driven by the Microsoft interconnect project, which is also being expanded, with a grand total of 14 countries cited as expansion zones. These are, in alphabetical order, Australia, Brazil, Chile, India, Israel, Japan, Netherlands, Saudi Arabia, Singapore, South Africa, South Korea, the United Arab Emirates, UK and US.